It's happened again. The Virgin Mary has appeared on some more food.

I'm all for finding inspiration where ever one can. I've never understood, for example, why the lesser faiths...I mean...separated brethran... dumped the saints, except for a couple of really big ones like John or Peter to name a church after. Why wouldn't you want to read about and follow the example of the people who managed to get it right? What's so wrong about being reminded of them by looking at a statue or a holy card? It's especially inspiring because the holy card artists make them much prettier on the holy card than they ever were in real live. If you don't believe me get a load of the real St. Catherine LaBourre sometime. Whew! Not surprising she became a nun! She's really pretty on her holy card though, just like how she looks in heaven where she doesn't even have to be air-brushed. oh well....


Where was I? Oh yes, Mary on food. Actually this time she isn't ON food...like the grilled cheese sandwich. She IS the food. Apparently some chocolate making machine dripped out a little Mary statue in chocolate. Not on purpose. This is just some drippings that globbed out next to the machine and the workers thought it looked like Mary. I think it looks like an owl.

The Catholic church really doesn't like this type of thing. It's kind of demeaning. People joke about it, the sandwich ends up in Vegas. Nothing good can come out of it.

In Chicago not long ago, oozy gooey freeway drippings formed a Mary image in a underpass on the expressway that stopped traffic for weeks until the city, in an effort to dissipate the crowd, washed it off. It came back, which seemed to only inspire the faithful all the more that it was some holy sign. 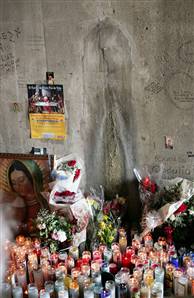 A year or two back Mary seemed to appear in the bark of a tree in the parking lot outside the General Mills plant where they make Count Chocula cereal.

It's just not right.

The church is only interested if it's really Mary and she shows up in a respectable way and says venerable stuff that doesn't negate any of the church's teachings. It's hard to do that from a luncheon platter, or from behind the chocolate machine. If we get lax here, think of the horrific things people could start seeing Mary in. I shudder to think.

And yet...if it gives someone pause, or hope, who am I to be the wet blanket of Mary sightings?
I draw the line if someone takes it as a 'sign'. When the sun spins out of the sky, or a healing spring pops up, or she shows you a vision of hell, there's your sign.

Anything else is a glob of half melted chocolate or tree bark or lime stains.
Posted by Sister Mary Martha at 11:05 PM

I just saw it, and I'm with you, it looks like an owl.. or maybe an eagle. There is a definite feathered wing.

I vote for the owl--it's shaped wrong for an eagle.

Just so no one is praying for it's intercession, I'm okay with it.
Sister Mary Martha

i thought owl. but that's just me.

i once had a potato chip at work that looked like patrick from spongebob. we saved it until some of our younger customers started lining up to venerate said chip. some things go a bit too far so we destroyed the chip in hopefully a way that was not sacreligious.

If we could get Sister Mary Fiacre to stop venerating potato chips she would be easier to lift into the tub.

At least Mary's appearance as chocolate is a bit more logical than her appearance as a cheese sandwich, assuming that since she WAS a woman she surely liked chocolate (or would if she'd had any).

When I wondered out loud why on earth Mary would appear as either chocolate or a cheese sandwich, one of my daughters said "I bet she wants to know that, too".

Sher, it's not polite to point.

So that's where my chocolate kestrel ended up. It was stolen.. listen, if it's not too old (past 6 yrs.), please ask someone to send it back. By air. *snort laugh*