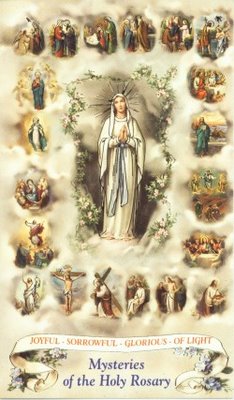 Sister St. Aloysius has organzied a rosary party to pray for the downfall of Cuba. We're very excited although we haven't picked the mysteries for it yet. I say, go for broke and do them all! It's also up to her to pick the Mary statue she'd like at the party. I vote for Fatima, the obvious choice against Godless communism. Sister St. Aloysius is so excited, she had to go lie down.

I promised I'd tell you the life story of Mary and I realized that the best way to do that is to use the rosary, her very special prayer, which is also the story of her life.

Again, for the separated brethren, which is how we refer to the lesser faiths since Vatican II (somebody PLEASE tell Mel Gibson), maybe we should first explain what's the deal with those beads.

WHAT IS THE ROSARY? (and if you need one click here)

You've all seen people with their beads clacking and their lips moving and wondered...."HUH?"*

The rosary is a meditative prayer. Mediative, as in chanting and meditation and "oooooohhhhhhhhmmmmmmmmm." Except instead of emptying the mind we fill it with thoughts on the life of Christ as seen through the eyes of his mother.

How did we come up with this thing? Way back when, monks had to 150 "Our Fathers" every day. It was hard to keep count. So they put 150 rocks in their pockets, walked around in a circle and dropped a rock out of their pocket for each Our Father until their pockets were empty. Then they would go drink beer. (They invented beer. I think they had the old Egyptian recipe.) I guess the nuns picked up all the rocks. Somebody had to. We didn't complain.

One of those Einsteins put those rocks on a string.

Somewhere in there the Hail Mary was invented. It's a really old prayer. It used to be just the first part: Hail Mary (which is a Roman expression of honor) full of grace, the Lord is with thee. (that's what the angel Gabriel said to Mary when he told her the big news of her impeding motherhood.) Blessed art thou among women and blessed is the fruit of they womb. (This is what Mary's cousin Elizabeth ...who was John the Baptisi's mom...said to Mary when they got together for a visit. Then they added "Jesus"...they added that to the prayer later so everyone would know who we were talking about.

So that was the whole prayer for a long time: Hail Mary full of grace the Lord is with thee, blessed art thou among women and blessed is the fruit of they womb, Jesus. The end.

Then there was this big heresy going around that maybe Jesus wasn't God when he was born. Maybe he 'grew into it'. And when that heresy was finally put to rest for good, the people were so happy took to the streets, like the expatriate Cubans in Little Havana after they heard Castro was really sick, shouting, "Holy Mary Mother of God!"

So that's the next line of the prayer.

Now as long as you've got her attention you may as well ask for something so the last part is: Pray for us (notice for the millionth time we are not praying TO her) sinners, now at at the hour of our death. Amen.

That's Mary's prayer that we say 50 times while saying the rosary. But to get to the 150 prayers of the old monks we have to go around the rosary 3 times, which is what you're supposed to do but everyone's lazy and they don't. They're lucky to get through it once without answering their cell phones.

During all of this you'll be lost in thought over incidents in the life of Mary that we've divided into three easy parts: The Joyous Mysteries (happy times in the life of Mary with Jesus, like his births and whatnot), The Sorrowful Mysteries (you can figure that out, can't you?), and the Glorious Mysteries (the highly unusual events, like Jesus ascending into heaven, rising from the dead...but in the right order). There are 5 events in each set of mysteries.

And since you're too busy to go through all three sets in a sitting, we've divided it up for you over the course of the week so you still have time for a frappacino. (Please imagine the expression on my face as I say that.)

But then a couple of years ago the Pope added a fourth set of mysteries called, 'The Mysteries of Light!" That moves the whole schedule over and puts the Mysteries of Light every Thursday.
If you're confused just remember "Luminous Mysteries Thursdays" instead of Seinfeld.

I think this schedule might be what put Sister Mary Fiacre over the edge and reduced her to the mumbling state she's now in. I have a large chart on the kitchen chalkboard right below the grocery list to keep it straight for myself. Sister St. Aloysius has it memorized.

*The expression "knock wood" came from the days of religious persecution in Ireland. People would warn each other to stop praying so as not to get caught and maybe even killed by clacking their rosary beads together. No wonder 'knock wood' comes before good luck.
Posted by Sister Mary Martha at 1:09 AM

I am finding your posts very enlightning. I have a pretty pink bling bling rosary and have no clue how to even use it.

I have several questions for you but I will start with this one since it starts at my beginning.

When I was a baby, before the invention of car seats, my parents rolled me in a blanket and laid me in the back seat of their car. Due to a near miss accident, my father had to hit the brakes and I went flying onto the floor. My mother was mortified because if I was dead she'd have to explain to my grandmother why I was not baptized yet. Fortunately for her I lived.

Now my question is, why would God put an infant into hell if the parents procrastinated on getting them baptised?

Before Jesus died for your sins, everyone who died went to limbo. That was called the limbo of the fathers While Jesus was dead he went and opened up limbo and let everyone out (it's in the Creed:"he descended into hell: actually means, limbo). so limbo closed.

But then at Vatican II we decided that babies and aborigines go straight to heaven, so limbo closed for good, like the Neverland Ranch.

So you would have rolled right into heaven.

Don't think it's that easy after the age of reason (age seven).
sistermarymartha

An "all religion" day over at my top 5, http://top5daily.blogspot.com got me thinking about my years at catholic school and a wee little man named Zacchaeus in a sycamore tree. I can't figure it out. Why did that midget have to serve Jesus tea?

There are two morals to the story of Zacchaeus, Christopher. The first is that perseverence is rewarded. Zacchaeus (a dyslexic's nightmare)was really short and didn't let that stop him from seeing Jesus. He climbed a tree.
This impressed the pants off of Jesus. Or it would have is Jesus wore pants. He decided to have Zacchaeus host Himself and the Apostles. (Sort of like if you go to a Tupperware party, the grand prize is that you have to throw the next Tupperware party.)

The second moral to the story is not to confuse the sin with the sinner, unless you are talking about Mel Gibson where they are one in the same.

Thank you so much. I had never heard about this "limbo" until I read your blog. I do recall reading about it earlier here. I didn't know if it applied to babies. My mother says never assume anything so I try not to.

You're welcome. Maybe you've heard of limbo. It was a famous dance.